skip to main | skip to sidebar

A Legion of Honor 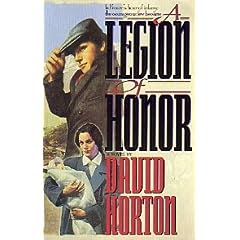 The heroine of A Legion of Honor (written by David Horton and published by Victor Books in 1995), Isabelle Karmazin, is a secular French Jew in 1942 who is fleeing the Nazis (which is what one would expect of a French Jew in 1942). One of the French women hiding Isabelle, Tante Marthe, says to her early in the book:

"God has been good to us, and the very least we can do in return is to offer a small kindness to one of Abraham's daughters."

In response, Isabelle thinks to herself,

"And as for God -- well, even if He existed, He hadn't seemed particularly good to her lately. He was apparently more interested in people like Ginette and her family. They weren't suffering much.... No, Isabelle decided, if a good God were paying attention, her husband and her father -- perhaps even her mother -- would still be alive.... During her detention at Venissieux, she had heard plenty of talk about God: from guards who cursed the Jews as "Christ killers," to fellow Jews who suddenly rediscovered religious rites they had spent a lifetime ignoring. She found it pathetic, mostly, and so hypocritical."

Wandering Jew says: Isabelle's cynicism is understandable, to say the least. The Holocaust, today and yesterday, leaves many with the feeling that a personal God, if he exists, was "off duty" to allow such horrors. So most of us who read this book ,whether we are Jews or Christians or atheists, will feel sympathy for Isabelle's character and not judge her for her skepticism in matters religious and otherwise.

A few pages later we get a further glimpse into Isabelle's psyche:

"Since her father had not attended synagogue to speak of, nor had he compelled her to go, Isabelle freely admitted that there was a whole dimension -- the religious side -- of her Jewishness that she did not understand. ... It wasn't that she was ashamed of her heritage, though she had sometimes found it socially inconvenient. She had simply adopted her father's view that there was no place in a scientific world for anything that wasn't, well, scientific. She glanced quickly around the room, expecting to see a crucifix or a smiling likeness of Jesus or Mary -- or both -- as she had seen in other Gentiles' homes. ... She had never understood how people could revere a symbol of torture and death. Or why they insisted on treating as alive a person who had supposedly lived and died centuries ago. Jews might have their weaknesses, she mused, but Gentiles were a study in contradiction."

We meet various French and German characters who espouse anti-Semitic beliefs throughout the book. (And, to be fair, we should mention that some characters espouse pro-Jewish beliefs).

Isabelle is a secular Jew, but she's also somewhat anti-religious. She has an interesting dialog with one of her Christian rescuers:
"I have seen far too much suffering to put much faith in Christian charity. Especially when there are some who use religion to justify their hatred." Madame Boussaint responds: "I won't deny that what you say is true. But not everyone who is religious is a Christian. We all have to answer for our own sins."

Wandering Jude notes that Madame Boussaint's response to Isabelle, while somewhat compelling, is also a stock answer to skeptics from Christian apologists. "Not everyone who is religious is a Christian." Of course, what she really means is "Not everyone who is religious is a good Christian." On its face this seems obvious to the average evangelical Christian believer, but from a Jewish perspective it's a cop-out. One can't absolve Christianity for the sins of its adherents by simply saying, "Oh, that person really wasn't a Christian. He just said he was a Christian." This answer is too easy and it doesn't convince most of us.

More thoughts from Isabelle as she listens to the Christian rescuers pray and read the Scriptures:

"Isabelle had to admit that it made her very uncomfortable. It wasn't so much the Scripture reading. She had heard something similar before -- one of the ancient Hebrew prophets, she guessed -- on one of the rare occasions when she had accompanied Papa to the synagogue. But when she overheard the family's matter-of-fact prayers for her protection and well-being, she felt confused and embarrassed: confused as to why they would ask for the protection they were in face providing; embarrassed at the thought that, having just met, they already cared for her."

At the end of the book, Isabelle does not become a Christian, but she develops a new appreciation for the religious faith of the Christians who took care of her before she escaped into Switzerland. But reader beware: there is a sequel coming that Wandering Jude will address in the next few days.
Posted by Ungathering at 6:20 PM